At one time, there were 3 stations making up the Washington Township Fire Department: Until 1937 they were Point Place, Trilby and Alexis. After 1937 they were Shoreland (Station 2), Trilby (Station 1) and Alexis (Station 3). Our present day coverage area was at one time covered by the Point Place Volunteer Fire Department (located on Summit St., the old Toledo Fire Station 24-now the Summit St. Station Hair Salon) and the Alexis Volunteer Fire Department (located on David Dr., now the present day Washington Township Hall).  The other Washington Township station was the Trilby Volunteer Fire Department (located on Secor Rd. now a Walgreens). The first station to disband was the Point Place station in 1937 following the annexation of Point Place by the City of Toledo. This station was made Toledo Fire Division Station 24 in 1940. The Trilby station was taken over by the Toledo Fire Division for Station 23 on January 25,1965 following the final annexation of most of Washington Township by the City of Toledo. The Alexis VFD was disbanded by the Twp. Trustees in the early 1970’s because their response area had shrunk to about one square mile due to annexation. The Shoreland name was dropped in 1972 since only one Washington Twp. station remained.

If anyone has any photos or stories about the Point Place, Trilby or Alexis stations that you would like to share, please contact the WTFD Web Administrator Firefighter Moe Collins. We would love to share your memories and keep the history and traditions of the Washington Township Fire Department alive.

May 7, 1923 – The first Point Place fire truck was put into operation

The station was located on the corner of Summit & 114th street where the flag shop is now located. The Volunteer fire department was started because of the passage of an ordinance by the Toledo council in which it was decided the city would charge so much per hour for all trips to Point Place. There was $5000 invested in equipment and 27 volunteer firemen working without pay covering territory about 17 miles by 6 miles. The report of a fire was given by telephone to the operator at the Edgewater exchange who relayed them to someone who sounded a siren at the fire station. Chief Baertschi was always on the job. If any volunteer fireman failed to attend a fire and had no good excuse, he was fined $1 or had to wash the boots and coats of other firemen. Money for upkeep was from proceeds of the Firemen’s Ball held at Point Place School. 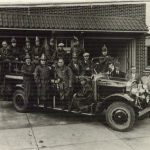 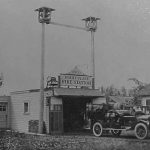 Some photos of part of the Trilby FD Memorabilia collection of Chief Dwight Pepin of the Solvang, California Fire Dept.

Chief Pepin’s Grandfather was Eldon La Follette who was Chief of Trilby for 23 years. 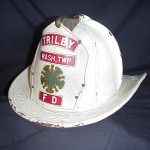 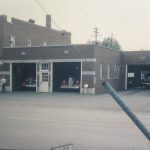 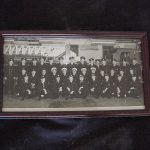 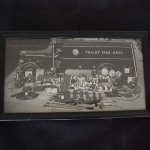 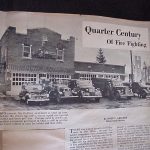 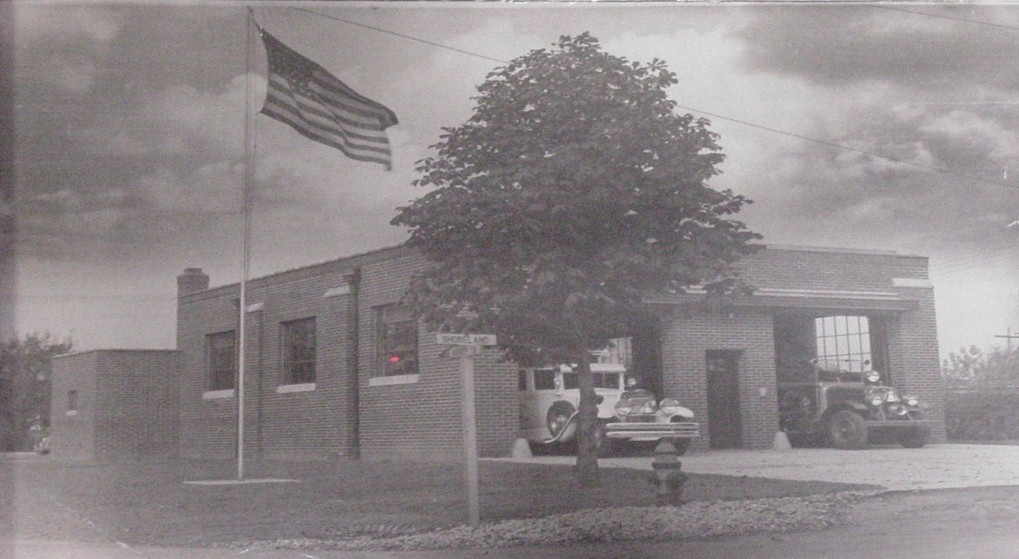 The disbanding of the Point Place Volunteers created the need for a new station to cover the area of Washington Township east of the “Dixie Highway” that was previously covered by agreements with the Point Place VFD. A special meeting was held on April 4th, 1936 at Shoreland School where Mr. Clarence L. Sass reported that he had been working for the past six weeks with the Washington Township Trustees to obtain a fire truck for Shoreland. A garage was purchased by the Township from Mr. Vernon Browne. The Township agreed to cover the cost of enlarging the garage to accommodate the large fire truck if the labor was done by the new department’s men.

The following are the minutes of the first regular meeting of the East Washington Township Volunteer Fire Department  April 14th, 1937 at Shoreland School.

The meeting was called to order by acting chairman C. L. Sass who is to hold the chairmanship until appointment of a Township Trustee for this district is complete. The following were named as Fire Commissioners at this meeting: Mr. Remle, Mr. Metzger and Mr. Scheureman. The appointment of Chiefs was next made: Chief of the Department: Mr. C.L. Sass, First Assistant Chief: Mr. Ellis, Second Assistant Chief: Mr. Kern. George Vincent was nominated and elected for the post of Recording Secretary. Dr. Howard Williamson was listed as Medical Aid to the department. The constitution and by-laws of the Point Place VFD which served that department so well were adopted by this department.

The following contains highlights of the first 13 months of meetings of the department:

Large siren for the alerting of members to calls was installed and wired by Terry Barrow. Charles Rodefer provided the location of the siren control.

Age restrictions were changed to between the ages of 18 and 40. Applicants under the age of 21 must have a note of consent from their parents.

Regular monthly meeting date was changed to the 3rd Wednesday of the month. (Note: This is still in effect today, 68 years later!)

The name of the department was officially made the Shoreland Volunteer Fire Department.

Chief Sass stated that there will be cooperation between this department and Trilby VFD.

Mr. Crabb surprised the members with badges carrying the insignia of the Shoreland Volunteer Fire Department. Every man received his badge.

First Aid classes were set up at this meeting.

All members were handed their Red Cross First Aid books.

Mr. C. Crites from the former Point Place VFD gave a talk about the different problems encountered in the area.

Chairman Crabb advised that the purchase of the property for the station was just about complete. Mr. J. Schurerman was named to head up the building committee.

Plans for a Feather Party were disclosed.

Plans for the new station were discussed. The building’s exterior will be taken from the old part of Shoreland School that is being torn down. The Building Committee got the ok to take all the brick they needed to construct the new station.

The Feather Party was a success. The next fund raising event was discussed. A committee will be set up to start a 4th of July party for the families of the members.

Obtaining a furnace for the temporary Fire Hall was discussed.

Purchase of property for the new station was completed.

All bricks from the torn down section of Shoreland School must be moved. The bricks also have to be cleaned.

The building Committee stated that all that could be done is done. Anything further will have to wait until the Trustees are in a position to do more.

A hydrant is now finally located on the city line on Hoffman Rd.

The membership was informed that the department will have fire drills.

Chief Sass stated there will be truck checks done every week.

The Township will give the department a total of $35.00 per month to operate the fire station. 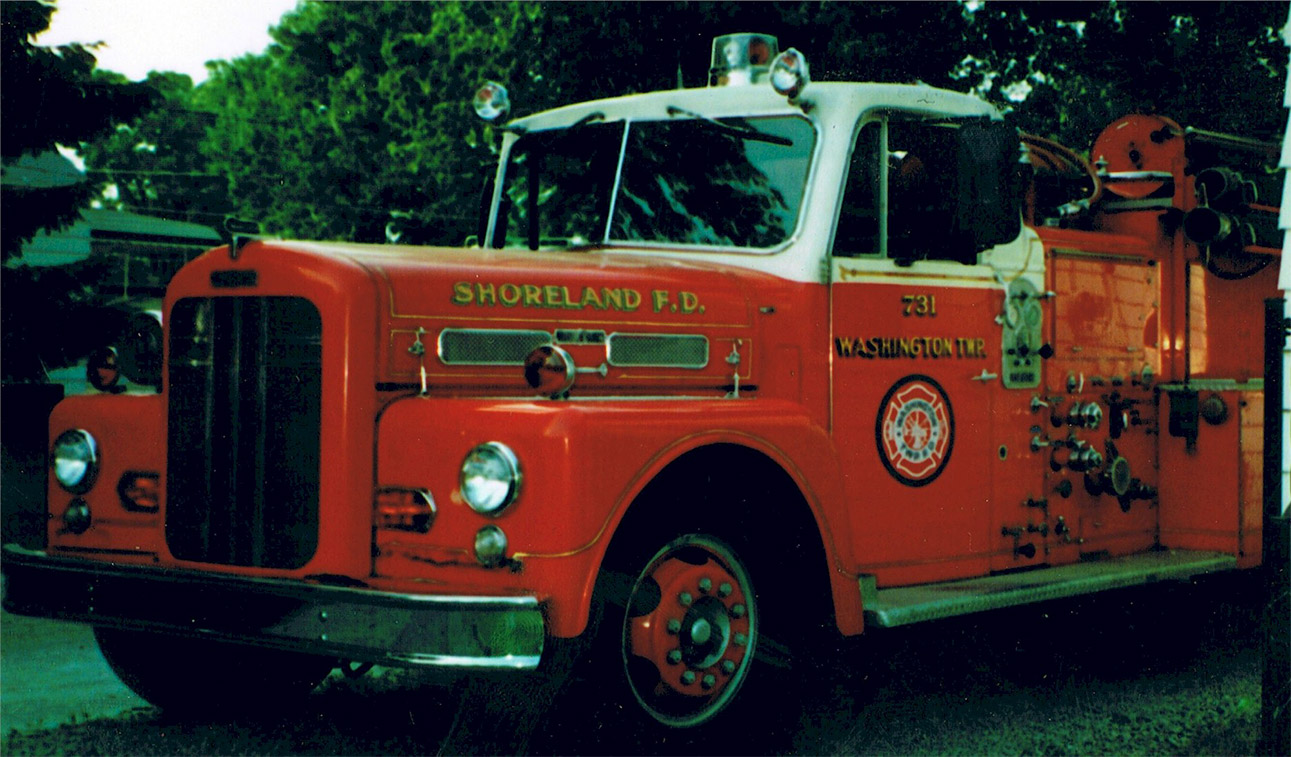 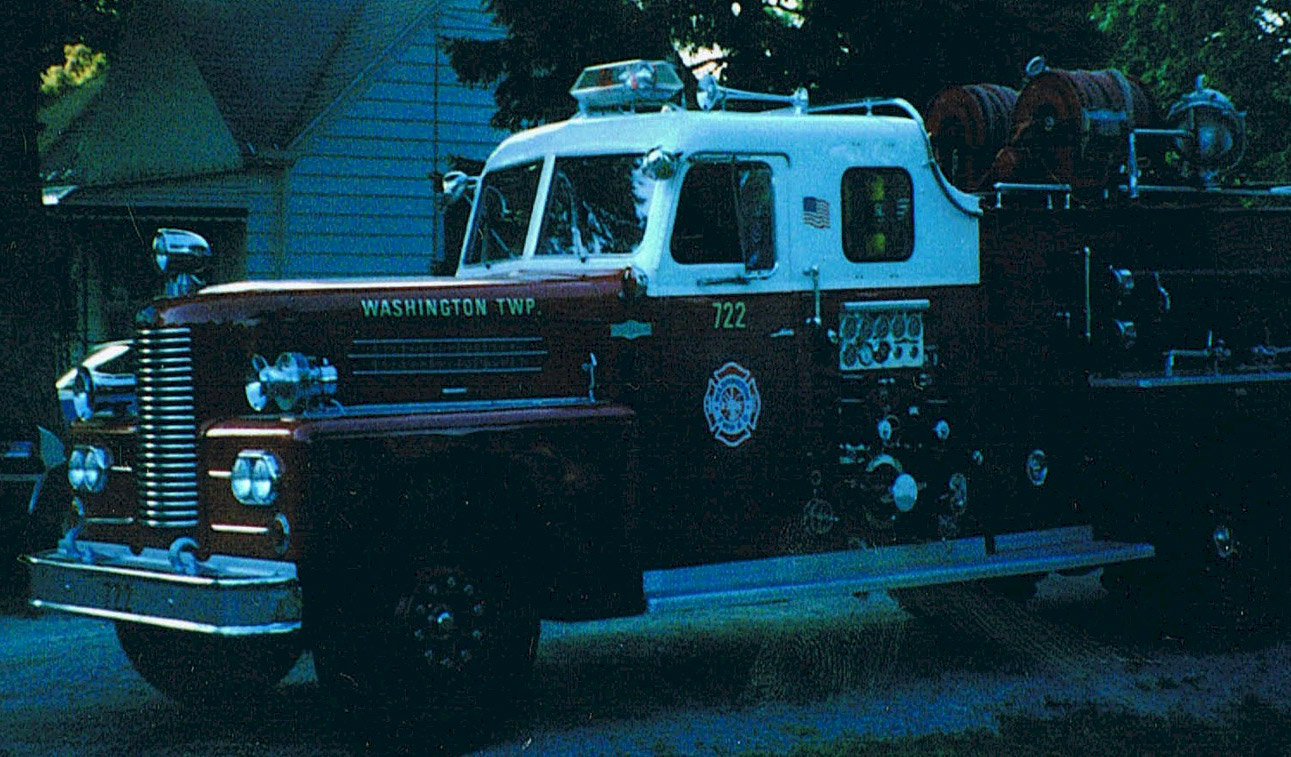